Milla Jovovich has 4.6 million reasons to smile, and just in time for the holidays. The fashion model and “Resident Evil” actress — her films have grossed north of $1.6 billion worldwide — has sold one of her several Los Angeles homes for more than double the $2.2 million she paid for the place nearly two decades ago, way back in 2003.

Over the years, Jovovich and Anderson have amassed a substantial L.A. real estate portfolio. They still own an investment property in the Mount Olympus neighborhood of the Hollywood Hills and a multimillion-dollar 90210 home that’s been described as a “Palm Springs-style midcentury.” But the family’s main residence has long been an $8.5 million, Tuscan-style villa in the mountains above Beverly Hills, tucked up a long driveway and just a quick jog to L.A.’s Coldwater Canyon.

Milla Jovovich shot to fame after she first appeared in a magazine cover. This was after she was spotted by a photographer at the age of 11. By the time she turned 24, she had several professional achievements under her belt including a teen elopement and annulment, a second husband and a divorce. In HBO’s new documentary ‘Showbiz Kids’, Jovovich gets candid about how she started out in show business and how her mother’s constant push affected how she grew up under the spotlight.

Watch it at the HBO

“Hey Everyone!!! So without my knowledge @evergaboanderson spilled the beans on the new baby yesterday 🙄🤦🏻‍♀️😂 which makes this ‘old news’ but anyway, yesterday 02/02/2020 at 8:56am Osian Lark Elliot Jovovich-Anderson was born!” Jovovich began in the caption. “Osian is a welsh boy’s name and it’s pronounced O-shin. Now I know the name is long, but the family couldn’t agree on her middle name. Ever and my mom wanted Lark, @dashielanderson and I wanted Elliot.”

“Then my husband Paul chimes in with another vote for Lark, so Smushy and I were out numbered 😛!” she continued. “At least she has many to choose from later in life if she wants to drop a few. She’s so beautiful! Her hair is lighter than the other girls was and she’s very strong. Her little hands get in the way and they’re hard to control and she’s already lifting her head up to see what’s going on!”

“She’s our miracle baby and we’re all so grateful to have her and completely obsessed with her!!” Jovovich concluded. “I will obviously post more pics later, but we are all exhausted because the last few nights have been crazy! I send you all so much love from the cloud I’m flying on!!! Xoxo m❤️☁️✨⚡️⭐️💥☄️”

In Ever’s post the day before, she shared a sweet pic of the family all together with their new addition.

“Welcoming Baby!,” she captioned the post. “Welcome to the world my new sister Osian (pronounced O-shun like the body of water)! We love you!!! ♥️”

Milla Jovovich visits “Too Tired To Be Crazy Podcast with Violet Benson”.

“It was like giving birth and having an abortion at the same time” Mila says during the interview.

We first start the episode with speaking Russian, her current obsession, DIY home tips, the reality and struggles of being pregnant, and her marriage including breaking up for almost two years. We dive into growing up with an abusive alcoholic father, being an immigrant, the moment she had to grow up, keeping the romance alive by having sex in the closet and laundry room, how being a mother changed her, having an emergency abortion while 4 1/2 months pregnant, the worst depression of her life, and how she survived it.

We end the podcast on a lighter note with playing a baby shower game, what weapons she hides next to her bed, her current film Paradise Hills that’s out in theaters now, and Monster Hunter that comes out in 2020.

While Jovovich is elated about the newest addition to her family, she admitted that this pregnancy has not been easy.

Milla explained that she’s known she was with child for quite some time, but decided to wait to share the news because she lost her last pregnancy.

“After I found out I was pregnant 13 weeks ago, I had a mixture of feelings ranging between complete joy and utter terror,” Jovovich wrote. “Because of my age and losing the last pregnancy I didn’t want to get attached to this potential baby too quickly.”

“That was obviously not fun and the last few months have been my family and I living on pins and needles waiting for a slew of different test results to come in and spending most of our time in doctors offices.”

I want to tell that the site and gallery will not update some months, because I does not have a time and idea.

We already know that Milla Jovovich is going to play the villain Nimue in the reboot of ‘Hellboy‘ but we haven’t seen much of who exactly her character The Blood Queen is quite yet. She has an obvious interest in Hellboy from the most recent trailer likely due to the prophecy that he is meant to bring about the end of the world and has some gnarly powers where she can turn others to dust like a mini-walking Thanos snapping his fingers for whoever is in range. Other than that? The teasers haven’t given us much.

A new interview with Milla Jovovich has the actress explain a little more about the Blood Queen, her powers and the motivation behind that “steamy kiss on Hellboy’!

As to her character, Milla says:
“The Blood Queen is literally the queen of the underworld in a sense. She is the mother of all of these creatures and monsters, she’s been around for millennia.”

That itself is a bit more detail than we’ve seen so far which is fitting. As to Nimue’s powers and what she wants from ‘Hellboy,’ that has already been hinted in the second trailer but Jovovich clarifies it just a little more:
“She’s able to throw plague and sickness on people…The Blood Queen fixates on Hellboy as a potential king for balance. The two of them could rule the world.”

It isn’t entirely clear if this Underworld which is mentioned is related to the Hell which exists in Mike Mignola‘s comics or if that might be another realm which she will eventually hope to conquer. 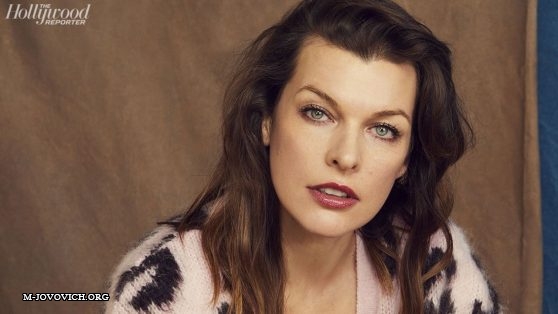 On January 26, 2019, Milla Jovovich and other cast was attended at the “Paradise Hills” Premiere during 2019 Sundance Film Festival in Utah.

And I have updated the our gallery with portraits:

The Foundation for AIDS research has chosen to recognize actor Milla Jovovich, photographers Mert Alas and Marcus Piggott and auctioneer Simon de Pury at the 2019 amfAR Gala in New York on February 6.

Every year, at the start of fashion week, amfAR throws a party at Cipriani Wall Street to pay homage to prominent figures working toward HIV prevention and AIDS education and to raise funds for its organization. Jovovich, Alas and Piggott and de Pury have each supported the nonprofit — Jovovich in particular is entrenched in multiple AIDS-related charities, including AIDS Life and the Elton John AIDS foundation.

For the 21st iteration of this event, the amfAR evening will feature a dinner, live auction, honoree tributes and a performance by The Chainsmokers.

On the Instagram Milla Jovovich was sharing news that she and her family spend the next 10 days in Paris.